Memories of July 4th past

ASM826 posted about a July 4th from living memory.  But there are other things about July 4th that make you think that Divine Providence  did, as Otto von Bismark remarked, look out for the United States of America.

Lots of people know that fifty years to the day after the Declaration of Independence was signed in Independence Hall, both John Adams (President #2) and Thomas Jefferson (President #3) passed on to that Undiscovered Country from whose borne no traveler returns.  But they weren't the last.  five years later, James Monroe (President #5) joined them. 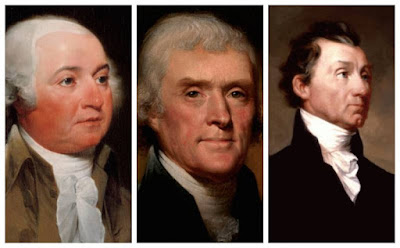 Divine Providence is not done with this Republic.

Labels: America, are you pondering what i'm pondering, i am a nerd, Old America

If you remove the living Presidents from the list, there's only 40 possible candidates for passing on the 4th of July. I didn't find anything about all three of them, but here's a link about the math involved on the odds that Adams and Jefferson died on the same day.