Because if he is, he needs to fire his Iowa organizer and disavow his statements. Otherwise, this is the albatross that hangs around Bernie's neck in November.


“I’m Ready to Throw Down Now…The Billionaire Class. The F***ing Media, Pundits. Walk into MSNBC Studios, Drag Those M*****F***ers Out by Their Hair and Light Them on Fire in the Streets.

Liberal Democrats Should be Placed in Gulags or be Put to Death: “Liberals Get the F***ing Wall First.”

“Well, I’ll Tell You What in Cuba, What did They do to Reactionaries? You Want to Fight Against the Revolution, You’re Going to Die for it, M*****F***er.” 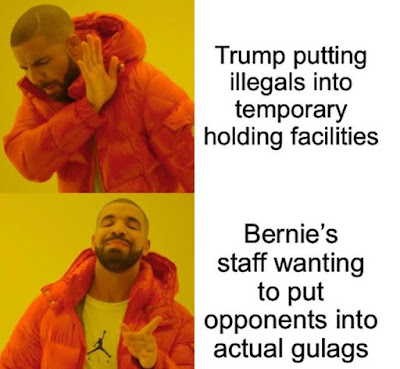 From a place you cannot see will come a sound you barely hear.

I love the quote about liberals. It's Homage To Catalonia all over again.

If you'll pardon my crudity, Jurek is just some asshole. He's a nobody, and chances are he'll be gone in moments. The really dangerous one in Bernie's organization is his economic advisor Dr. Stephanie Kelton. She believes in Modern Monetary Theory. A government can not run out of money, they just make up whatever they need out of thin air.

Remember how they asked Alopecia Occasional Cortex about how to pay for the $40 Trillion it cost to do "Medicare of all" and she said, "you just pay for it?" That's Dr. Kelton in 99% fewer words.