Colt made a John Moses Browning designed .22 semi-auto pistol for decades. It was called The Woodsman, mostly. Early models are now called pre-Woodman and there are later variants. I have one. It is the only gun I own that belonged to my grandfather and I am sure this is not my first post on this.

It comes up today because I was looking for a set of target grips with a thumbrest. It looks like I will have to have a go at making them. My Google-fu is weak and I have not found a set to purchase.

But once I was down the rabbit hole, I started looking for a spare magazine as well and stumbled onto Bob Rayburn's Colt Woodsman Page. Even if you have never held a Woodsman and have no interest in shelling out a grand or more on an antique .22 pistol, this site deserves a visit. Detailed information for the collector, historical data, and the real reason I am posting this, pictures and vignettes on some rare variants. That link takes you to the first picture in the first series.

I'm not a collector, I'm a shooter.  Collecting guns and then deciding they are too pretty, too rare, or too expensive to shoot strikes me as wrong. Too each their own, though, and I'm willing to spend some time on a cold rainy December afternoon looking at some interesting pieces of history. 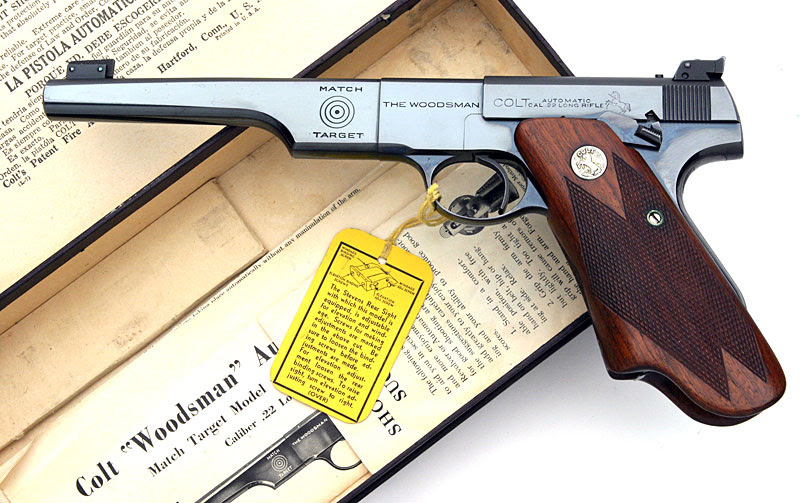 Very nice, and with its history you have a real keepsake.

Like you, I'm a shooter and not a collector. Back in December of 1989 Buckeye Sports in Ohio had Ruger make a special run of the Blackhawk in .32-20/.32 Magnum convertible. A friend of mine with an FFL got me one at cost which if I recall correctly was $287. I bought it as a collectible and put it away for five or six years. Then one day I was thinking that I would probably never sell it and after I'm gone my wife or daughter would. Might as well take it out and shoot it like every other gun that I have. That's what they're made for. Never have regretted firing it. That's one fine and fun shootin' iron.........

Did you find a source for a magazine. Mine is a series 1 from 1919 and I need one. Please post if you found a source.